BOSS celebrates those who chase their dreams with courage and conviction to define their own path. This bold attitude, widely championed in the latest campaign, defines the BOSS brand and will be the center of a new podcast series called Behind the BOSS.

Diving into the lives of extraordinary artists, creators, and athletes, each of the episodes will uncover what drove each guest to become the boss they are today. The episodes will explore the turning points in their journeys to success, inspiring with insights and experiences.

Hosted by London-based culture writer Raven Smith, known for his irreverent wit and insights into modern living, each episode will explore the moment that each guest realized their true purpose, the moment that they doubted it all – and the moment they felt like they had finally made it. The turning points that help to define any boss, they’ll provide the motivation and inspiration for our audience to define their own path.

The podcast is the latest step in the company’s CLAIM 5 growth strategy, which aims to boost the desirability of its brands and turn customers into fans. It will be released bi-weekly, streaming on all major platforms and on BOSS’s own global channels.

High resolution images can be downloaded from:
https://galleries.launchmetrics.com/p/hugoboss-production/showrooms/62697519aec09400093faabc

About Law Roach
American stylist and TV star Law Roach has taken the industry by storm, becoming a fashion force to be reckoned with. Working with superstar celebrity clients from Zendaya to Celine Dion, Roach has transformed Hollywood’s style landscape while simultaneously being a part of ground-breaking shows like America’s Next Top Model and Legendary.

About Cathy Hackl
A metaverse industry expert, tech futurist, and top business executive, Cathy Hackl has spent almost a decade working in metaverse-related industries. As Chief Metaverse Officer of the Futures Intelligence Group, Cathy and her team work with top global brands on virtual world building, holistic metaverse strategies, NFT drops, and web3 roadmaps. Hackl was recently featured in 60 Minutes+, WSJ, and Wired, and has been named one of the top 10 most influential women in tech by BigThink.

About Anthony Joshua
British boxer Anthony Joshua is a two-time world heavyweight champion, having held the WBA, IBF, WBO, and IBO titles for the last 3 years. As an amateur, Joshua represented England at the 2011 World Championships super-heavyweight division, winning a silver medal. By the following year he won gold at the 2012 London Olympic Games. Joshua has been lauded as “Prospect of the Year,” earned “Fight of the Year” in 2017, and is widely regarded as one of the top heavyweights on the planet. Joshua has been a BOSS ambassador since 2019. 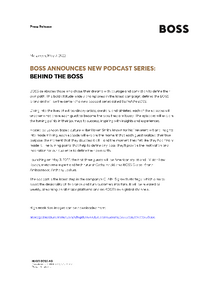