BOSS is proud to announce that the brand has become the Official Partner of the legendary Hahnenkamm Races in Kitzbühel, Austria. The four-year agreement with the Kitzbüheler Ski Club (K.S.C.) and the marketing agency of the Hahnenkamm Races, WWP Weirather – Wenzel & Partner, will kick off in the beginning of next year, and continue through 2025.

The partnership will start in January 2022 by providing extensive visibility to BOSS through the branding of the banners and ski gates on the slopes, as well as further activations. From 2023 onwards, the collaboration will be further expanded by BOSS becoming the Presenting Partner of the Hahnenkamm Races. With this partnership, the German fashion brand celebrates its return to skiing sponsorships and its support for winter sports after a long break.

“The Hahnenkamm Races, and especially the Streif, are absolutely unique and a true legend in the global world of winter sports. We are more than excited about our comeback as a partner of the races for the upcoming years, and to rethink the way we create an experience for the visitors with BOSS. Our brand, and also the athletes, stands for innovation, precision, success, passion, and emotion. In that sense, the Hahnenkamm Races and BOSS are ideal partners,” says Daniel Grieder, CEO of HUGO BOSS.

Philipp Radel, CEO WWP adds to this: “We are very happy about the return of BOSS as one of our Official Partners of the Hahnenkamm Races. We are sure that our joint initiatives for the next four years are going to be a great success. We are committed to bringing together, with our partners, constant evolution and innovation in alpine skiing. In this regard the new brand spirit of BOSS is a perfect match.”

The Hahnenkamm Races are considered the most spectacular and impressive event in the international alpine skiing race calendar. The downhill race on the legendary Streif, and the races on the Ganslernhang get over 300 million views every year, just in Europe alone. The KITZ-RACE-Club is the top premium hospitality event for winter sports. In 2022, the ski races will take place January 21 - 23.

About BOSS and HUGO BOSS:

BOSS is known worldwide for its tailoring DNA - but along with this signature product category, BOSS has expanded beyond the confines of tailoring to offer a complete range of casualwear, bodywear, accessories, and athleisure that form a 24/7 wardrobe for the change-makers of today, in every role they play. The product range includes licensed products such as fragrances, eyewear, watches, and kidswear. Customers can experience the world of BOSS in over 400 own stores worldwide and on boss.com. BOSS is the core brand of HUGO BOSS, one of the leading companies positioned in the premium segment of the global apparel market. With its two brands, BOSS and HUGO, the group offers collections in 127 countries at around 7,350 points of sale and online in 47 countries via hugoboss.com. With approximately 13,800 employees worldwide, the company, based in Metzingen (Germany), posted sales of EUR 2.9 billion in the fiscal year 2019.

About the Hahnenkamm Races:

The Hahnenkamm Races have been held since 1931 and are organized by the Kitzbühel Ski Club (K.S.C.). The downhill race on the Streif is considered the most spectacular slope in the FIS Ski World Cup calendar with 80m jumps, steep slopes up to 85% gradient and speeds of 140 km/h. Winning in Kitzbühel is considered a career highlight for athletes alongside the Olympic Games or the World Championships. More than 700 media representatives from over 30 countries are on site in Kitzbühel. The race weekend generates more than 180 hours of TV time and reaches 300 million TV viewers in Europe alone. www.hahnenkamm.com

WWP Group is one of the leading agencies in the sports business with more than 30 years of market experience. In sports marketing, WWP Group conceives and innovates worldwide for its clients and partners. With creativity and entrepreneurial spirit, it enables and activates sponsorships, develops sports marketing platforms and advises international brands.
WWP Group has sport in its DNA: passion and sporting spirit are among its corporate values. 100 sports and communications experts look after WWP Group's client interests and projects at various locations across Europe. Mirjam Hummel-Ortner and Philipp Radel have led WWP Group as CEOs since 2013.

The premium event of WWP Group is the Hahnenkamm Races in Kitzbühel. WWP has been a marketing partner of the Kitzbühel Ski Club (K.S.C.) since 1997 and markets this event as the ultimate sponsorship and B2B platform of the winter season. WWP organizes the famous KITZ-RACE-Club, the meeting point for more than 1,000 opinion leaders from business, politics, sports and culture.
Current projects include the activation of ABB as naming-right partner of the ABB FIA Formula E, as well as sponsorship activations of bwin with their engagements in soccer (UEFA, DFB, Borussia Dortmund, St. Pauli, FC Köln and many more), Audi in winter sports and the global soccer engagement and Porsche with their entry into Formula E.
www.wwp-group.com. 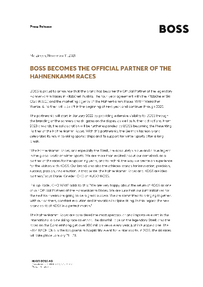