Friends of the brand flocked to Scotland’s historic home of golf for a chance to play the famous course themselves.

The event began with breakfast at the Old Course hotel, just a few feet from the 17th fairway. Attendees were then treated to a training experience with past Open champion Sandy Lyle, followed by a bite to eat at the exclusive members-only Forgan House.

In the afternoon, guests took part in a golf challenge on the Old Course that included “Longest Drive” and “Nearest to the Pin” competitions. The day culminated in a private dinner at the Rusacks hotel, followed by a prizegiving ceremony, recognizing the best competitors of the day.

The day celebrated the brand’s longstanding relationship with R&A and its sixth year as official clothing partner of The Open. As part of BOSS’ partnership with the United Nations Children's Fund UNICEF, the event raised money that will go towards helping vulnerable children around the world.

The brand also introduces a new BOSS x The Open capsule to mark the event. Styles put an elevated spin on golf performance and feature a 150 motif in celebration of the championship’s historic anniversary. The capsule will be available online and in selected stores from June 1 onwards. For The 150th Open itself, BOSS athletes Patrick Cantlay, Thomas Detry, Matthias Schwab, and Henrik Stenson (who won The 145th Open at Royal Troon in 2016) will be dressed in the brand’s Premium Golf Collection as they all vie for the esteemed Claret Jug.

The event was a defining moment for BOSS, propelling it forward on its journey to become a top 100 brand. In line with the company’s CLAIM 5 strategy and following its successful brand refresh and Dubai debut, the event introduced the game of golf to a new generation - showing that you can #BeYourOwnBOSS in sport too.

High resolution images can be downloaded from:
https://galleries.launchmetrics.com/p/hugoboss-production/showrooms/62989ec6dd8d5f0009d2cde4

If you have any questions about the company, please contact::
Carolin Westermann
Vice President Global Corporate Communications
Phone: +49 7123 94-86321
E-mail: carolin_westermann(at)hugoboss.com 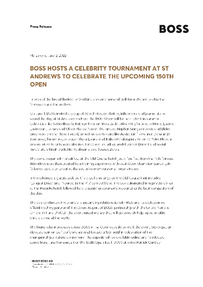