Shanghai, October 18, 2019. For the first time, BOSS has unveiled its Pre-Fall collection for men and women with a runway show, taking place at the unique location of Tank Shanghai. The former oil storage tanks, now an artistic hub, were the backdrop for a colorful celebration of the BOSS art of dressing, presented under the title “BOSS loves Shanghai”.

Preceded on October 17 by the biennial HUGO BOSS Asia Art Award, and followed by an after-party for 800 guests, the runway show was an opportunity to honor the close relationship between the BOSS brand and the dynamic, forward-looking city, and was attended by international stars including BOSS Eyewear ambassadors Henry Cavill and Wu Chun.

Models showcased the collection on a circular catwalk, walking alongside projections of themselves some 3 meters high. A bespoke “BOSS loves Shanghai” logo outside the building gave an early indication of the key accent color in the collection, acid lime, which was also reflected in the lighting throughout the event spaces.

Revealed on Friday night, BOSS Pre-Fall 2020 takes the brand’s signature tailoring as a starting point, and evolves it in many new directions.

Tonal dressing anchors the collection, with head-to-toe looks in an array of hues including sand, navy, off white, and eggplant. Injections of mint green and rose pink, alongside a camouflage animal print, provide further depth and energy, while accents of zingy acid lime confirm the uplifting mood.

Lightweight suiting, including an off-white tuxedo, and feminine dresses in a spectrum of colors provide endless sartorial inspiration for the new season.

Fabrics are easy, light and modern: paper-touch nylon, crinkled double-weave cotton, floral lace and fluid silk. The contemporary cool of BOSS Eyewear completes many of the looks, which invite every BOSS man and woman to celebrate the summer in style.

Hip-hop stars A-Yue and MC Hotdog performed in front of a rapturous crowd at the after-party, which also featured sets from DJ Arthur Bray and VJ Kwony, and a spectacular light show.

Further information on the company can be found at group.hugoboss.com. For the latest news on our collections, visit hugoboss.com. 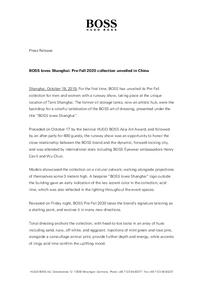