BOSS reclaims the slopes as the official partner of the Hahnenkamm Races, starting friday

BOSS is proud to be the Official Partner of the legendary Hahnenkamm Races in Kitzbühel, Austria, taking place January 21 – 23, 2022. With this partnership, the German fashion brand celebrates its return to skiing sponsorships and support for winter sports after a long break.

This year’s race marks not only the start of a four-year partnership but also the introduction of the new BOSS logo with a notably bolder graphic typeface conveying a contemporary look and impactful visual experience. The new BOSS branding will appear throughout the event and is a teaser of a more comprehensive brand refresh planned for 2022.

"We are very excited to unveil our new BOSS logo in Kitzbühel and to present the new spirit of the brand here for the first time. The Hahnenkamm Races are legendary, making them the perfect setting for such a historic moment. We look forward to creating unique experiences for the visitors off the slopes in the years to come, and to inspiring a global audience for BOSS," says Daniel Grieder, CEO of HUGO BOSS.

From flags on the course to banners and animated LED walls at the start and finish zones, the run will be lined with the striking new BOSS logo while the general event area will feature branded take-overs.

Looking skywards, a gondola on the Fleckalmbahn, the most impressive cable car on the mountain, will also be stamped with BOSS attitude, and a hot air balloon and paragliders will be emblazoned with the bold BOSS logo as they journey around the peak.

Diving back into the archives of 2002, BOSS reveals an exclusive limited-edition silver ski jacket that both nods to past achievements while setting sights on an innovative and thrilling future for the brand. Detailed with patches celebrating the partnership and large BOSS embroidered lettering across the back, this unique piece is padded with recycled materials. This jacket even includes patented RECCO® technology that enable the wearer to be found by rescuers for increased safety on the slopes. A limited number of the jackets will be available to purchase on hugoboss.com.

The Hahnenkamm Races are considered the most spectacular and impressive event in the international alpine skiing race calendar. The downhill race on the legendary Streif, and the races on the Ganslernhang get over 300 million views every year, just in Europe alone.

High resolution images can be downloaded from:
https://galleries.launchmetrics.com/p/hugoboss-production/showrooms/61e97d31c24547000943f19b

About BOSS and HUGO BOSS:
BOSS is known worldwide for its tailoring DNA - but along with this signature product category, BOSS has expanded beyond the confines of tailoring to offer a complete range of casualwear, bodywear, accessories, and athleisure that form a 24/7 wardrobe for the change-makers of today, in every role they play. The product range includes licensed products such as fragrances, eyewear, watches, and kidswear. Customers can experience the world of BOSS in over 400 own stores worldwide. BOSS is the core brand of HUGO BOSS, one of the leading companies positioned in the premium segment of the global apparel market. With its two brands, BOSS and HUGO, the group offers collections in 127 countries at around 7,350 points of sale and online in 59 countries via hugoboss.com. With approximately 13,800 employees worldwide, the company, based in Metzingen (Germany), posted preliminary sales of EUR 2.8 billion in the fiscal year 2021.

About the Hahnenkamm Races:
The Hahnenkamm Races have been held since 1931 and are organized by the Kitzbühel Ski Club (K.S.C.). The downhill race on the Streif is considered the most spectacular slope in the FIS Ski World Cup calendar with 80m jumps, steep slopes up to 85% gradient and speeds of 140 km/h. Winning in Kitzbühel is considered a career highlight for athletes alongside the Olympic Games or the World Championships. More than 700 media representatives from over 30 countries are on site in Kitzbühel. The race weekend generates more than 180 hours of TV time and reaches 300 million TV viewers in Europe alone. 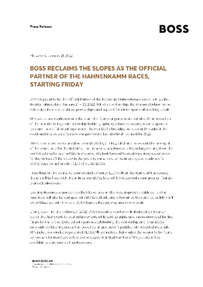