Shanghai/Metzingen, January 8, 2020. HUGO BOSS is pleased to announce that Li Yifeng, famous actor and singer, has been named brand ambassador for BOSS. The new Spring/Summer 2020 BOSS campaign starring Li Yifeng will be featured across Chinese media and BOSS stores as well as other point of sales.

“Li Yifeng shows multiple styles and unique individuality. The roles he played bear witness to his boundless potential. His confidence and attitude is the epitome of BOSS men who are on their way to greatness. We are looking forward to the partnership with Li Yifeng and believe that he will fully embody the eternal yet ever-evolving BOSS DNA by impeccably interpreting from formal wear, casual to athleisure, “said Ingo Wilts, Chief Brand Officer HUGO BOSS AG.

“I’m honored to become the brand ambassador of BOSS. For me, BOSS has been a trusted and desirable brand. The brand value and spirit it represents inspire me to keep trying and strive forward,” said Li Yifeng, ambassador for BOSS.

Born in Sichuan Chengdu, China, Li Yifeng made his debut as a singer in 2007, and gained extensive attention for his role in the TV series Swords of Legends (2014). Later, he made a name for himself by taking on various roles in the TV series Legend of Fragrance Noble Aspirations, The Lost Tomb and Sparrow. His performance was recognized by global Chinese media. He also convinced the audience with his performance on the big screen, receiving the award for Best Supporting Actor at the 33rd Hundred Flowers Award for his role in the movie Mr. Six in 2016, as well as for his stunning leading roles in the movies Guilty of Mind and Animal World. 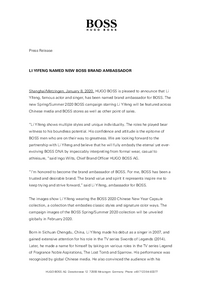