HUGO BOSS successfully kicked off its brand refresh, following its new growth strategy, with the simultaneous launch of the two star-studded global campaigns for its brands BOSS and HUGO on January 26. Together, the two global campaigns gained a coverage of 1.9 billion impressions and 75 million engagements across social media in 1 day – a record-breaking result for the company.

The activation across all consumer touchpoints, leading with an impressive digital activation on the launch date by more than 200 talents posting their personal BOSS stories on Instagram, Weibo, Red, and WeChat with images of themselves wearing the signature BOSS hoodie, created a phenomenal digital buzz around the world.

The #HowDoYouHUGO global campaign, featuring top model Adut Akech, rappers Big Matthew, SAINt JHN, and dancer Maddie Ziegler, is activated across all channels, with a focus on TikTok, where a dance challenge generates additional buzz and high engagement on the platform. The #HowDoYouHUGO challenge, choreographed by brand face, Big Matthew, and TikTok creator, Vik White, is amplified by 60 creators. Also, different social-first content layers connected to the worlds of dance and music have been produced for the activation. In the course of the first day, the brand’s followership on the account increased by 30%.

In addition, the relaunch made a significant impact for the online flagship store hugoboss.com which greatly benefited from the success of the campaigns. Global internet traffic for hugoboss.com more than doubled, reaching a record level, and the signature BOSS hoodie nearly sold out and was the bestselling single style in the history of the company.

The success of the two campaigns is visible across all KPIs achieved in the first day and makes them the most successful ones in HUGO BOSS history:

With these social-first campaigns, HUGO BOSS presented an unexpected and new identity for its brands, further strengthened their position across all digital channels, and reached new and younger target groups like Gen Z and millennials. This is the biggest milestone in executing the CLAIM 5 growth strategy to boost brands and to turn customers into fans.

If you have any questions, please contact
Carolin Westermann
Head of Corporate Communications
Phone: +49 7123 94-86321
E-mail: carolin_westermann(at)hugoboss.com 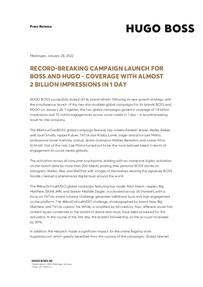