This Sunday, the Alex Thomson Racing team returns to competitive racing as the Rolex Fastnet Race begins. On the HUGO BOSS yacht, skipper Alex Thomson and co-skipper Ollie Heer will set sail from the Isle of Wight, on the grueling 695-nautical-mile race.

The 49th edition of the world’s largest offshore race has attracted one of the biggest fleets in its 96-year history. More than 350 boats across multiple classes are taking part, sailing via the Fastnet Rock off south-west Ireland towards a brand-new finish line in Cherbourg, France – a route that Alex believes will add “a new tactical dimension to the race.”

The race marks a return to the water for the IMOCA 60 yacht, some eight months after being forced to retire from the Vendée Globe 2020 due to damage to the starboard rudder of the boat. Fully inspected, serviced, and with two new rudders installed, the boat returned to the water in May, with the team now excited to get back to competitive racing after successful training in recent weeks.

Speaking about the race, Alex Thomson said, “I am really looking forward to being back racing and lining up against a strong IMOCA fleet on the start line of this year’s Rolex Fastnet Race. The HUGO BOSS yacht is in fantastic shape following repairs we made earlier this year, and we have spent the last few months training and testing in the Solent. This is one of my favorite races and I am especially looking forward to competing alongside Ollie for his first race in the IMOCA class.”

33-year-old Ollie Heer has been a key part of the Alex Thomson Racing team since 2018, and this will be his third Fastnet – and his first together with Alex. A Swiss national living in the UK, Ollie has already sailed over 50,000 nautical miles on the HUGO BOSS yacht and has ambitions to be a Vendée Globe skipper.

Further information can be found at
group.hugoboss.com/en/sponsorship/sports-sponsorship/sailing. 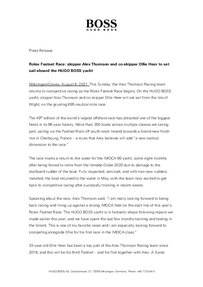