“Our impressive growth in the first half of the year reflects the many successes related to our comprehensive branding refresh,” says Daniel Grieder, Chief Executive Officer of HUGO BOSS. “We have significantly increased the relevance of BOSS and HUGO within a very short period of time. Based on this momentum, we will continue to work rigorously on the execution of our ‘CLAIM 5’ growth strategy and pursue our ambition to become one of the top 100 global brands.”

HUGO BOSS looks back on a highly successful second quarter, with top- and bottom-line growth further accelerating. Momentum was fueled by the rigorous execution of the Company’s “CLAIM 5” growth strategy introduced one year ago. As pre-announced in July, currency-adjusted Group sales increased 34% compared to the prior-year period. In Group currency, revenues were up 40% to EUR 878 million in the three-month period (Q2 2021: EUR 629 million), marking the strongest second quarter in the history of HUGO BOSS. Sales once again significantly exceeded pre-pandemic levels, up 29% compared to Q2 2019 (Q2 2019: EUR 675 million). This represents a further acceleration as compared to the first quarter of 2022, driven by ongoing high consumer demand in Europe and the Americas.

Brand and product initiatives drive momentum for BOSS and HUGO
Across brands, momentum was fueled by the successful branding refresh. Several marketing initiatives, in particular the global brand campaigns for BOSS and HUGO, created strong buzz on social media and drove brand relevance among younger consumers such as Millennials and Generation Z. The latest BOSS and HUGO collections, with their new and bolder look and feel, piqued interest especially in these target groups and have resulted in strong sell-through rates. On top of that, the launch of various capsule collections including BOSS x Khaby and HUGO x Mr. Bathing Ape created further excitement. Consequently, both BOSS and HUGO recorded significant double-digit sales improvements. Currency-adjusted revenues for BOSS Menswear were up 35% year over year and grew 29% as compared to 2019. Sales for BOSS Womenswear increased 23% currency-adjusted, translating into growth of 6% compared to 2019 levels. At HUGO, currency-adjusted sales were up 37%, translating into growth of 39% on a three-year-stack basis.

Europe and the Americas with strong acceleration in Q2
From a regional perspective, growth was particularly strong in Europe and the Americas, with both regions recording a further acceleration in momentum in the second quarter. Sales in Europe increased by 41% year over year, translating into growth of 36% compared to 2019 levels, both currency-adjusted. This development was driven by double-digit improvements in key markets such as Great Britain, France, and Germany. Also in the Americas, momentum remained strong in Q2 with currency-adjusted sales up 45% compared to the prior year, thereby exceeding 2019 levels by 38% with all markets contributing. In the important U.S. market, where HUGO BOSS continues to successfully foster its 24/7 brand image, revenue growth saw a further acceleration compared to the first quarter of 2022. In Asia/Pacific, currency-adjusted revenues remained on par with the prior-year level. Strong double-digit growth in South East Asia & Pacific compensated for a sales decline in mainland China, largely reflecting COVID-19-related temporary store closures throughout much of the second quarter. As compared to pre-pandemic levels, sales in Asia/Pacific were down 4%.

Momentum in brick-and-mortar business strongly accelerates in the second quarter
All channels contributed to the strong performance in the second quarter. The Group’s digital business once more recorded double-digit growth, being up 11% currency-adjusted against a particularly strong comparison base. Compared to pre-pandemic levels, total digital revenues more than doubled, up 128% currency-adjusted. Also in brick-and-mortar retail, HUGO BOSS saw robust double-digit sales improvements, with currency-adjusted revenues up 38% compared to the prior year and three-year-stack growth amounting to 19%. This development was supported by the successful execution of important strategic initiatives aimed at further optimizing the global store network. In this context, the new BOSS flagship store at London’s Oxford Street, which was opened in mid-June, marks a particularly important milestone. In brick-and-mortar wholesale, on the other hand, currency-adjusted revenues increased 51%, fueled by wholesale partners’ strong demand for the latest BOSS and HUGO collections fully reflecting the branding refresh. On a three-year-stack basis, growth accelerated to 18%.

EBIT more than doubles to EUR 100 million
In light of the strong top-line performance in the second quarter, the operating profit (EBIT) more than doubled to EUR 100 million (Q2 2021: EUR 42 million). This development was also supported by a noticeable improvement in gross margin, mainly reflecting a higher share of full-price sales, as well as operating expense leverage. In doing so, the company was able to more than compensate for non-cash impairment charges of EUR 15 million related to its store network in Russia. When compared to pre-pandemic levels, EBIT significantly improved by 25% (Q2 2019: EUR 80 million). 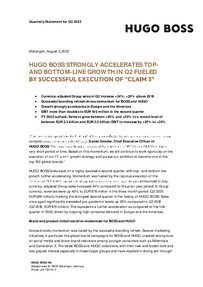